You are in Applications » 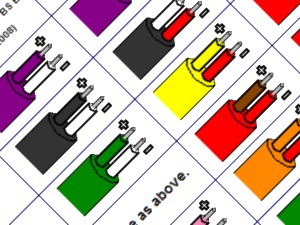 Thermocouple temperature sensors can be made with various conductor materials for different temperature ranges and output characteristics. Over the years these have been standardised with defined temperature difference vs millivolt output relationships.

These established thermocouple “Types”, e.g. “Type K”, (sometimes confusingly referred to as “thermocouple calibrations”) are not compatible with each other and must have their own connecting cables and measurement instruments configured for that Type. Because of the way thermocouples work it is paramount that polarity (connection of positive to positive and negative to negative) is always followed through all connections.

The table below shows the most commonly encountered colour codes used on thermocouple leads and connectors. These are used to identify the Type and positive and negative wires. It is important to recognise the unfortunate use of the same colours for outer sheaths and connectors on different thermocouple types under different standards. Other colour coding systems also exist but are not shown below, these include French, German and Japanese.

Short Web Address to this page:

The QR Code to the left can be scanned with a smart phone to visit this page.